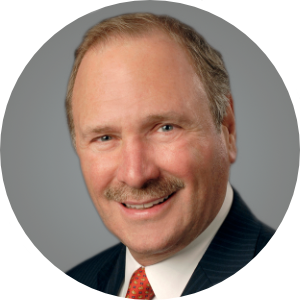 Arthur J. Mirante II joined Avison Young in 2012 as a Principal and Tri-State President, based in the firm’s New York City office. One of the most accomplished and respected professionals in the commercial real estate industry, Mirante serves as a member of Avison Young’s Executive Operating Committee.

Prior to joining Avison Young, Mirante worked at Cushman & Wakefield for more than 40 years, where he most recently served as President of Global Client Development. Prior to that, he served as the firm’s CEO for 20 years.

During Mirante’s tenure as CEO, Cushman & Wakefield’s revenues increased from $100 million to $1 billion and the firm expanded from 60 U.S. offices to 173 offices, including 100 outside the country.

Throughout his career, Mirante has participated in some of the New York market’s largest and most complex transactions, including the sale of the World Trade Center, the headquarters relocations of MasterCard International and The Guardian Life Insurance Company, the record $1.72 billion sale of 200 Park Avenue for Metropolitan Life in 2005, the record $1.8 billion acquisition of 666 Fifth Avenue in 2007, and the long term lease of 75 Rockefeller Plaza to RXR in 2013.