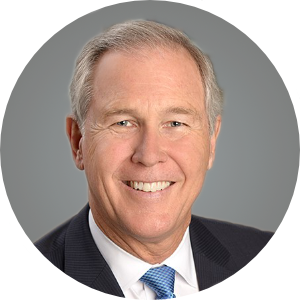 Brandon Birtcher is the co-owner & CEO of Birtcher Development LLC, a leading U.S. industrial development company inspired by his great-grandfather in 1939. He joined the family firm in 1976 after graduating with a Bachelor of Arts Degree in Business/Economics from Claremont Men’s College and serving 6 years in the U.S. Coast Guard Reserves.

Since its inception, Birtcher has developed for some of America’s finest companies and has acquired, managed or developed more than 65 million square feet over 260 projects valued in excess of $7 billion dollars. With the 5th generation now in its ownership, the company specializes in developing speculative infill and big box warehouse facilities from 100,000 sqft to 1.5mil sqft in the highest barrier to entry markets of the US that can also demonstrate the highest absorption.

From 2012-2016, Brandon served as CEO of Goodman Birtcher North America, a joint venture that was capitalized with $2bil of equity, 55% from the Goodman Group of Australia and 45% from the Canada Pension Plan Investment Board. Under his leadership, Goodman Birtcher developed a pipeline valued at $1.7bil, containing 14 mil sqft of logistics space across 13 sites in 4 states. Customers include Amazon, Georgia Pacific, Walmart and Porsche/Audi to name a few.

At present, Mr. Birtcher is a member of ULI, the World Presidents Organization—California Coast Chapter (Chairman 2003/2004), and sits as advisor to the Hoag Hospital Cancer Center Board and the University of California Irvine Paul Merage School of Business.