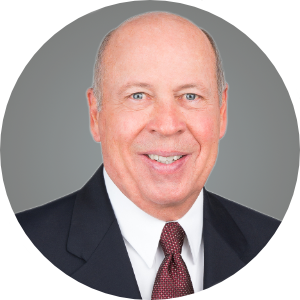 David has been active in commercial real estate for more than 37 years, and has earned a reputation as a results-oriented, ethical team player, respected by his peers and clients alike. Prior to joining Kidder Mathews, David served as executive vice president and managing director for Transwestern. Previously, he worked with Grubb & Ellis, and served as the firm’s national Industrial Practice Group leader as executive managing director, responsible for the oversight and support of 450 industrial professionals throughout North America.

David spent 10 years prior in the Pacific Northwest where he served as principal at Northwest Realty Advisors, specializing in commercial investment services. He also served as senior vice president and general manager at Colliers International for their office in Portland, successfully merging the existing Colliers firm with Bullier & Bullier, and continuing to strategically expand their business in the Portland Metropolitan area.

David began his career in commercial real estate at Coldwell Banker Commercial (now CBRE Group) in 1980. During his tenure, he quickly climbed the ranks from “Rookie of the Year”, to the sales manager of CB’s Los Angeles office, to vice president and resident manager of the firm’s Jacksonville, Florida office. David was responsible for leading the office to consistent Top 10 performances in the Eastern Division, and was later promoted to senior vice president of the firm’s 35-broker Riverside, California office where he successfully repositioned the office in the marketplace and restructured personnel during the economic down turn of the early 1990’s. Under David’s leadership, the Riverside office ranked in the Top 10 for
CB Commercial as well.