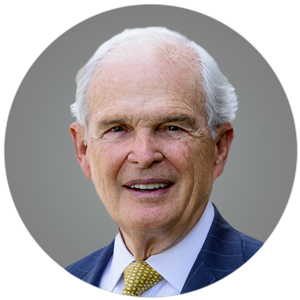 Peter G. Doyle is the Executive Vice President of Development for The Howard Hughes Corporation. He is responsible for Strategic Development Projects at The Woodlands, the Howard Hughes Corporation’s 29,000-acre premier Master Planned Community and Bridgeland, a 12,000-acre MPC in West Houston. Projects currently being developed include development of Hughes Landing, a 66-acre urban mixed-use project, which when built out, will contain 1.9 million sq. ft. of office space, 200,000 sq. ft. of retail, 1,500 multi-family units, a 200 key hotel, which will complement The Woodlands Resort and Conference Center (recently completed $65M upgrade) and various restaurant and entertainment venues. Other projects planned include a 300 key hotel, a 500,000 sq. ft. office building, and multiple office, retail and multi-family projects.

Following his start as an Architect in New York and Houston, he began a 26-year tenure with Linbeck Construction (Texas-based national builder), having risen through positions from Engineer/Estimator and Project Manager to President and Chief Operating Officer. Mr. Doyle then created a Program Management firm called Partners +, which provided Project Delivery Management services to a variety of both public and private clients. Projects included Commercial, Industrial and Residential project types. Later, Doyle became a Principal in a Real Estate Development firm where he directed the completion of several building projects including an office building complex in Boca Raton, Florida that was designed by renowned Architect Phillip Johnson. In 2001, Mr. Doyle returned to the General Contracting business, when he assumed the role of President of JE Dunn South Central, one of six regional subsidiary units of JE Dunn Construction (an ENR Top Ten Building Contractor). He led that regional operation from an annual billing total of $50 million to $320 million in just 8 years. Directly involved in the design, planning and construction of well over $5 billion of projects, Mr. Doyle has project experience involving a wide variety of building types, sizes and geographic locations. Examples include the Biosphere Visitor’s Center in Oracle, Arizona; a 16,000-seat sports arena in Miami, Florida; twin City Center Towers in Ft Worth, Texas; a 100 mil dollar in renovation projects for M.D. Anderson Hospital in Houston, construction of a 40 story high rise residential project in Austin, Texas, construction of a 80 mil dollar Research Building for Texas A&M, the delivery of a five star hotel in Los Angeles, California and many other notable projects.

Over his career, Mr. Doyle has served in the role of Architect, Developer, General Contractor, Owner and Industry Leader. His project delivery philosophy is based on the concept of ‘Team Delivery’, where all parties to a project work together to create a more successful final product.

Mr. Doyle received a Bachelor of Science in Architecture from the University of Notre Dame, which also recognized him with an Alumni Honor Award from the College of Engineering. He received a Master of Arts in Architecture from Rice University and completed the Advanced Management Program at Harvard Business School. He was named Fellow of the American Institute of Architects and is also a LEED Accredited Professional. He is licensed in the State of Texas as a Registered Architect & Interior Designer.

Mr. Doyle is currently active in the following organizations: American Institute of Architects, American Institute of Constructors, the Associated General Contractors of America and World Presidents Organization. He served as Chairman of the Building Division of Associated General Contractors of America and as Chairman of National Institute of Building Sciences, a Washington D C based organization. He also was a founding member of the Houston Convention Center Hotel Board which was responsible for delivery of a 1,200 key four-star hotel. Most recently, he served as Chairman of the Development Committee of the Botanical Garden of Houston.

Peter has been married to his wife Poppy for 47 years. They have five grandchildren. Payton (12), Parker (9) and Pearce (3) from their daughter Patty and her husband Patrick, whom reside in California, and Garrett (5) and Addison (3) from their son Matthew and his wife Teresa, whom live in Houston.

Peter and Poppy spent three years overseas in Iran and Greece in the 70’s when he ran Linbeck Construction Middle East. He performed work in Saudi and Iran and they traveled quite a bit during those years. The last year was spent with Athens as their base. They enjoy traveling.