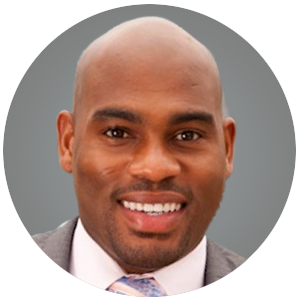 A passion for business best describes Terrence Maiden. With over a decade of experience in the industry, Terrence has poured his energy, creativity and expertise into the development /project leasing of over two-million square feet of retail. As Executive Vice President of Corinth Properties, he is at the forefront of implementing the growth strategy for the company, as a real estate owner and developer. Terrence’s most notable projects to date are Glen Oaks Crossings, The Canyon in Oak Cliff, and Red Oak Crossings, and redevelopment of Southwest Center Mall.

Terrence Maiden received a degree from Texas Christian University, where he and his identical twin brother were standout football players for the Horned Frogs. He is actively involved in several professional and civic organizations in Dallas and Fort Worth, including Mayor Star Council, Coalition of African American Professionals and Organizations (Co-Chair), Real Estate Council (Board of Directors), Urban Land Institute, Texas Christian University National Board (Former Vice President – National Alumni Board), Texas Christian University Legacy Committee, International Council of Shopping Centers, Dallas Black Dance Theater (Board Member), and many more. In 2005, Terrence Maiden co-founded Two-Wins Foundation with twin brother Tim. Two-Wins Foundations is a non-profit organization that invests thousands of dollars within inner communities through educational and community revitalization programs.

Terrence Maiden was named to the distinguish list of D CEO Power Broker for seven consecutive years (2012-2017). In addition, Terrence was awarded “Minority Business Leader of the Year” (Dallas Business Journal-2009), a finalist for “2011 One Man Dallas”, Dallas top executive under the age of forty (Dallas Business Journal- 2013), Tomorrow’s Leader – Texas (Real Estate Forum Magazine – 2014) . In 2014 he was the recipient of the Thomas L. Houston Award for his community service and 40 under Forty by Dallas Business Journal. In 2015 Terrence along with his identical twin brother were inducted in Texas Christian University‘s Hall of Fame. Both Terrence and Tim were recognized by WFAA (ABC News) and Cadillac for Shaping DFW. Terrence is also a featured writer for D Magazine’s CEO Real Estate Daily.