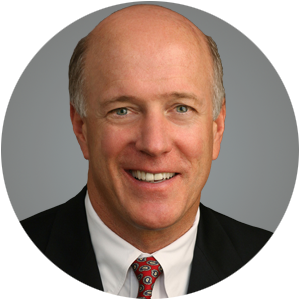 Mr. Donahue joined the company in 1979 and has been engaged in nearly all of the 32 million square feet of retail space in which the company has been involved. He has worked in every aspect of the business, including leasing, asset management, development and corporate strategy. Mr. Donahue has been instrumental in fostering key relationships and opportunities that paved the way through the company’s early days in regional mall development and management and parlaying the knowledge and disciplines obtained into becoming a recognized leader in the operation and development of neighborhood, community, and power shopping centers.

Mr. Donahue previously served as Executive Vice President Operations and took on the role of President after the sudden death of his brother, Dan Donahue, in 2002. He added the CEO role when Tom Schriber stepped back from his day-to-day duties in 2005. Mr. Donahue assumed the role of Chairman of the Board upon Tom Schriber’s retirement in 2010.

Mr. Donahue graduated from California State University, Fullerton (CSUF) in 1978. He is a Past Trustee and former Western Division Vice President for the International Council of Shopping Centers (ICSC) and currently serves on its Foundation Board. Mr. Donahue’s philanthropic works include KidWorks, Guardian Scholars, the California Showcase, the Orange County Real Estate Luncheon which benefits the Orange County veteran population, Notre Dame High School, and the Rose Bowl Legacy Board. In 2019 he received CSUF’s Vision and Visionaries Distinguished Alumnus award and was also recognized by CREW-OC with their annual SPIRE Award for Superior Performance in Philanthropy.