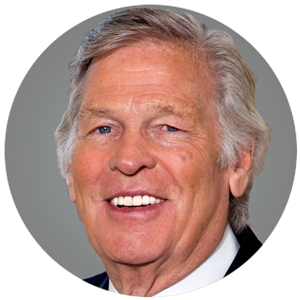 Nelson Rising is a veteran of over 40 years in the real estate industry and the Chairman and CEO of Rising Realty Partners, LP, a real estate investment and operating company. He has led two large publicly traded real estate companies, chaired the Federal Reserve Bank of San Francisco and built some of the most iconic buildings and new communities in California and the West. Mr. Rising has also served as a top political strategist to some of the most powerful elected officials in the United States and has the distinction of having a street named after him in San Francisco, CA: Nelson Rising Lane. Prior to forming Rising Realty Partners, Mr. Rising was President & CEO of MPG Office Trust, Inc., the owner of over half of the institution-quality office space in downtown Los Angeles. From 1994-2005, Mr. Rising served as Chief Executive Officer of Catellus Development Corporation. During his tenure, he oversaw the company’s successful evolution from a railroad land company to a diversified development company and a real estate investment trust. Most notable of the many Catellus developments is Mission Bay in San Francisco, the largest mixed-use development in the history of the city. Catellus merged with ProLogis in September 2005 in a $5.5 billion transaction.

From 1983-1994 Mr. Rising was a senior partner of Maguire Thomas Partners. During this time he was the partner-in-charge of the Library Square development in downtown Los Angeles, which included the 73-story, 1.3 million square foot US Bank Tower (tallest office building West of the Mississippi) and the 54-story, 1.4 million square foot Gas Company Tower. He was also partner-in-charge of Playa Vista, located between Los Angeles International Airport (LAX) and Marina del Rey. Playa Vista is one of the largest and most complicated multiuse developments in the history of Los Angeles and it includes the re-use of what was the heart of the Howard Hughes aircraft empire, including the famed “Spruce Goose” Hangar. A former Chairman of the Board of the Federal Reserve Bank of San Francisco, Mr. Rising is recognized as an authority in corporate and public finance. Mr. Rising is Chairman Emeritus of Washington, DC-based Real Estate Roundtable, which brings together leaders of the nation’s top publicly-held and privately-owned real estate ownership, development, lending and management firms to jointly address key national policy issues relating to real estate and the overall economy. Mr. Rising has also served as Chairman of the Grand Avenue Committee, and real estate advisor to and negotiator for the Joint Powers Authority, which consists of the City of Los Angeles, the Los Angeles Community Redevelopment Agency, and the County of Los Angeles. The Joint Powers Authority oversaw the Grand Avenue Project, a 3.6 million square foot, $3 billion development located on Bunker Hill in downtown Los Angeles. Mr. Rising currently serves on the Board of Directors and Executive Committee of The Irvine Company, which controls over 98 million square feet of commercial, office, residential and resort properties in coastal California. He also serves on the board of Foley Timber & Land Company. Mr. Rising is also a member of the Board of Trustees and Executive Committees of the California Institute of Technology and the W.M. Keck Foundation.

Mr. Rising is well respected for his role in advising elected officials at all levels of government and is credited with managing the successful Mayoral campaigns of the late and legendary Los Angeles Mayor Tom Bradley, who served for twenty years as Mayor. He has chaired campaigns for California Governor and U.S. Senate as well. Mr. Rising received a B.A. with honors in Economics from UCLA and a Juris Doctor from UCLA School of Law, where he served as Managing Editor of the UCLA Law Review. He practiced law at O’Melveny & Myers prior to entering the real estate industry.